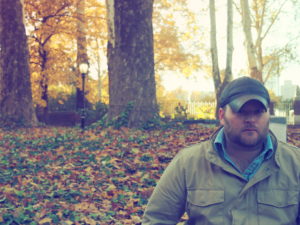 Available everywhere February 22nd, 2019, “Wayward Skies” is the debut full length album from southern Illinois native and Nashville, TN based roots country rock artist Dom Wier. This record is a culmination of Wier’s efforts over the past 10 years, which include more than 1200 shows performed, a thousand songs written and half a million miles traveled on America’s highways and backroads. From the dark corners of the smokiest backwoods bars in the south to noteworthy festival stages, this songwriter and working musician has seen the harsh realities of the music business, the joys of hard won little victories, and along the way put pen to paper.

Produced with Matthew Miller in Nashville, “Wayward Skies” is for all intents and purposes, a country folk rock record. The 12 song album features strong guitars, driving rhythms and distinct road worn vocals. After growing up along the Mississippi River near St. Louis and then spending 10 years in Tennessee, Wier has taken influence from elements of rock, country and blues music. This record represents where he is at this moment as an artist in 2019. There are echoes of classic rock and country music heroes on this album. Acceptance, recklessness, despair, hope, holding on to your loved ones for dear life, death, middle American grit, determination, perseverance, brutal honesty and heart. You’ll find it all across “Wayward Skies”. Available everywhere February 22nd, 2019.

With a tip of the hat to heartland rock heroes, like Petty, Seger, Mellencamp and Fogerty, Dom Wier weaves a thread of roots country rock songwriting with a classic middle American touch. Originally from southern Illinois near the banks of the Mississippi River, he cut his teeth playing guitar and singing in different bands in the St. Louis area. After a move to Nashville to pursue songwriting and immerse himself in music, he began performing as a solo artist, meshing his rock, folk and Texas country influences with those of country giants like Waylon, Willie and Johnny Cash.

Two EPs “Jaded Dreamer” and “After The Flood” were produced and recorded with Grammy winning engineer Nick Autry (Buddy Guy, Chris Young) at Sound Stage Studios in Nashville, TN. A third, six song EP “Born On The Mississippi”, released July 30th, 2013, was recorded over a several month period at different studios near Nashville. It features a version of “Tear Me Back Apart”, a song written by the highly respected folk rock tunesmith John Moreland.

Dom has been steadily touring since 2010, averaging 100-150 shows per year. There have been plenty of full band tours in old beat up vans and many stripped down acoustic shows all over the United States. From the dark corners of smoky backwoods bars to wineries, theaters and festival stages, the journey of this particular working musician has brought lots of miles traveled down long highways at 2am, meeting all kinds of folks from different backgrounds and opening shows for acts like Asleep At The Wheel, Kenny Wayne Shepherd, Shooter Jennings, Blackberry Smoke, Candlebox, Foghat, members of Lynyrd Skynyrd and Toto among others.

After a solo hiatus and a stint in the Nashville based Americana group The Good Routes, Dom joined up with producer/friend Matthew Miller. They recorded a collection of new songs for a debut full length album. The first wave of these new songs came in the form of a four song EP titled “New Waters” released January 19th, 2018. The debut full length album “Wayward Skies” was released February 22nd, 2019. The album reached #89 on the itunes country charts, independently, with no Nashville label support. These songs blend rock, country and blues textures with an honest, slightly road worn vocal delivery. The first single “Doses” is a roots rocker that has helped garner the attention of national Americana and Country music media outlets/publications.  Another single “One Way Road” released July 20th, 2018, exemplifies Wier’s hard driving midwestern country rock sound and is a standout track on the album.

The single “Ride This Train (Anywhere She Goes)” was released January, 18th 2019. This track is an upbeat country rock song that finds Wier taking influence from the Memphis Sun Records era and mixing in a layer of the earthy mid-American grit that he is becoming known for. Co-written with producer Matthew Miller, the song features a scorching lead guitar solo from John Carter Cash’s guitar player Dave Daeger, who also plays in Wier’s live band. The track appears on the full length debut album “Wayward Skies”.

Since the release of “Wayward Skies” Wier has became a father, continued recording/touring and is steadily releasing new singles. The most recent single is “Trying To Stay Out Of Trouble” released January 24th, 2020. The track is an upbeat barn burner that features the strong southern rock artistry of Matt Nicholls who joins Wier on vocals and guitar. This Wier-penned song is as classic as it is country with a Waylonesque rhythm. Wier and Nicholls trade lead guitar solos and sing lyrics about lessons learned, moving on, embracing a new life and doing your own thing. The recording features Audie Shields (steel guitar), Chris Mason (drums) and Patrick Martin (bass) with Matthew Joseph Miller as producer. 2020 will see several more releases including songs titled “Lookin’ Out On Brooklyn” and “Secrets Of Tomorrow”. Stay tuned.